It’s just physics. No other endpin comes close to the increased speed and projection.

Order Yours
I have never before produced such rich volume of sound! ...I think it is a brilliant invention…
— Sam Magill, Metropolitan Opera Orchestra

Welcome to an Endpin for the Modern Stage

How Can an Endpin Change My Sound? It’s All about Stiffness and Mass.

Most cellists know that changing your endpin can change your sound, but how does that happen? It’s all about stiffness and mass. Your instrument’s job is to vibrate the air to send its sound out to the listener. However, the endpin is absorbing some amount of that energy. It flexes like a big divingboard in what is called a linear flex spring. Naturally, it flexes at different frequencies depending on how stiff and heavy it is and those properties are a function of its materials and dimensions, but for power and projection, the ideal endpin is as stiff as possible.

Carbon fiber is about 25% as stiff as steel. It flexes a lot more. This is why a cello alternating between the two will find the carbon fiber to be a darker sound with less projection. It’s like this in the bicycle world; steel frames are made of rather thin steel tubes while carbon fiber bikes are constructed with tubes that are about 4 times as large. That’s because the other way to make a tube like a bike frame or an endpin stiffer is to increase the diameter of the tube. What about titanium? It is twice as stiff as carbon fiber, but half as stiff as steel.

The well-known Japanese bell-metal endpin on the market is a high-carbon steel that is stiffer than most lower grade endpins and made a name for itself among cellists for its boost in projection. Compared to normal grade steel endpins, it might be as much as 25% stiffer.

Mass, also, is a factor. This is the idea behind the heavy, thick brass endpins available on the market. Brass is heavier than steel and the added mass allows the endpin to resist vibrating and absorbing energy. However, adding another pound of weight to the cello or having to carry the endpin outside the cello from gig to gig is a tough choice. Also, while added mass can certainly increase projection, most players find that, when compared to a lightweight endpin with increased stiffness, the tone tends to be less textured and resonant.

We believe the ultimate sound comes from the stiffest endpin possible with the lowest mass. Silicon Nitride is as hard as sapphire and is at least 3x stiffer than the stiffest steel and has only a third of the density.

Your endpin is the greatest thing in the world. I put one in my Vuillaume, and I can’t tell you how much it has impacted the cello’s response, and my playing as a result! I want to get one in the General Kyd Strad ASAP!
— Robert DeMaine, Principal Cello, LA Philharmonic

Not generally. However, if hit hard enough, silicon nitride will not bend and could possibly break. In hundreds of Krentz Endpins sold, only 2 have ever broken and both were hit hard while extended and unattended. No rod has ever broken under normal circumstances.
Everything moves at a certain frequency based on its mass and its stiffness. As you shorten a string, its mass changes and the frequency goes up. If you strike a long piece of metal vs. the same size piece of wood or rubber, you will hear very different frequencies.

Designed with you in mind

This tip has everything. 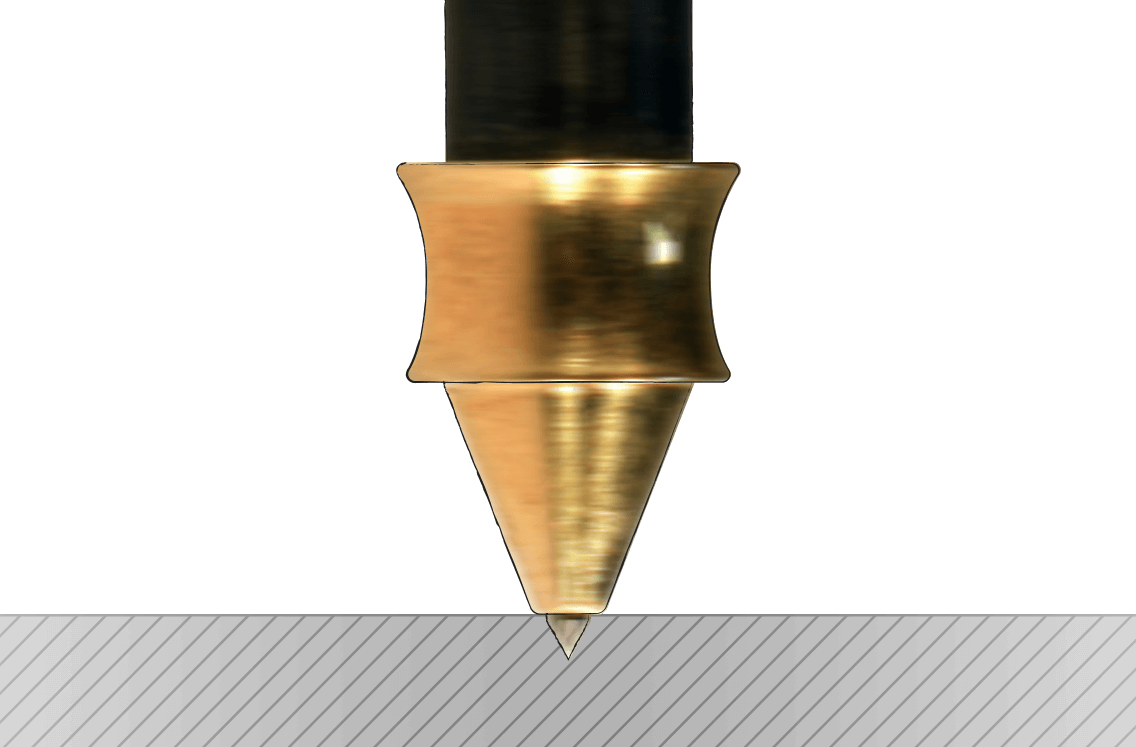 Silicon nitride is one of several industrial “super-ceramics” and is the most fracture resistant of the group. Compared to steel, it is several times stiffer, many times harder and much lighter depending on the type of steel or silicon nitride in the comparison.

There are different ways to make Silicon nitride and each method has different mechanical properties like stiffness and hardness. The Krentz Endpin is made by super-heating silicon in the presence of nitrogen while under pressure. This produces the strongest type of material mechanically since the primary concerns for its use in an endpin are stiffness and fracture resistance. They are then turned on a lathe and diamond-polished to the final rod diameter of 12mm.

Elsewhere, silicon nitride is the finest choice for ball bearings due to its incredible hardness and resistance to fracturing and were used in the main engines of NASA’s Space Shuttle. It is also used in heavy industry as a cutting material for iron and hard steels and can cut five times as much material with one edge as more traditional materials like tungsten carbide. Silicon nitride is also often used to make turbine fans in the finest jet engines and high-performance turbos. 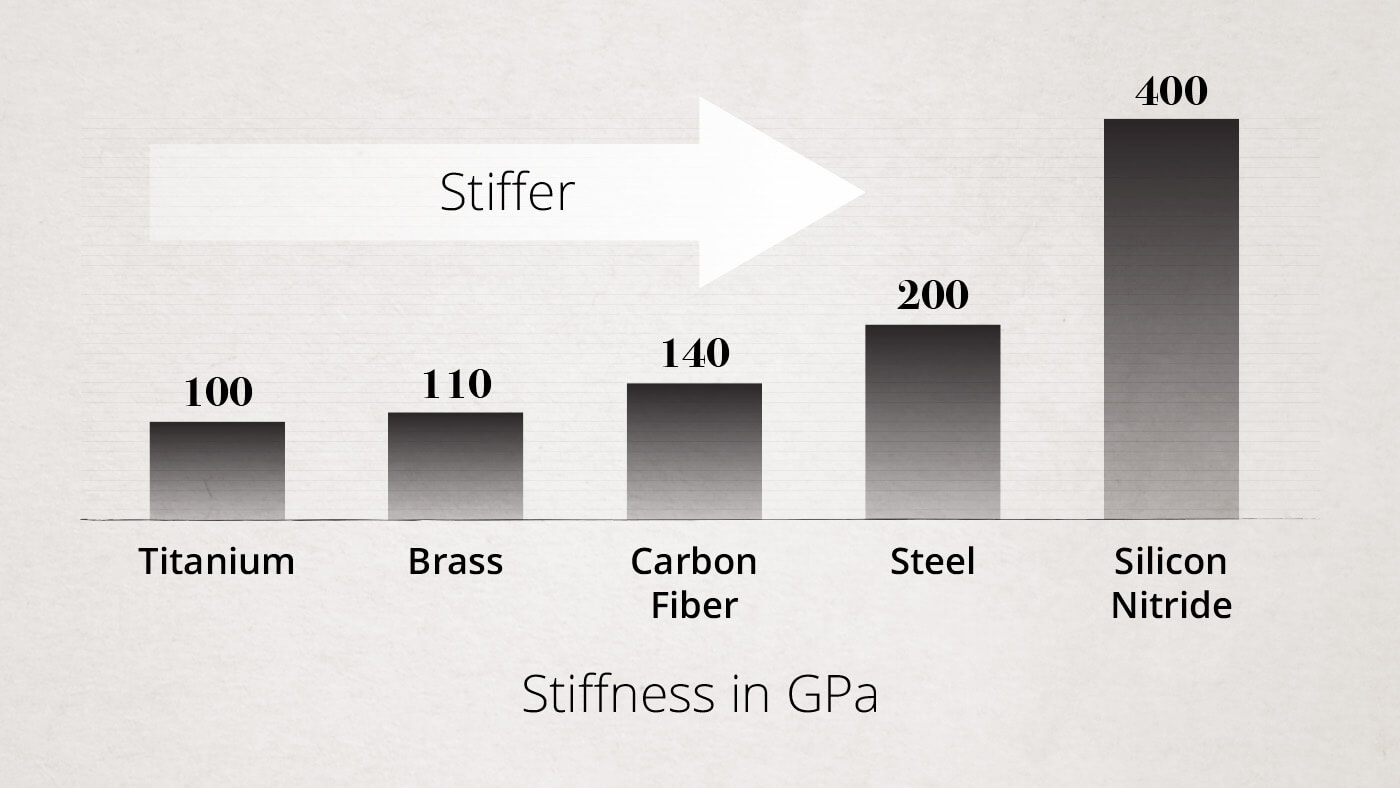 But it is also quite light for all its stiffness. 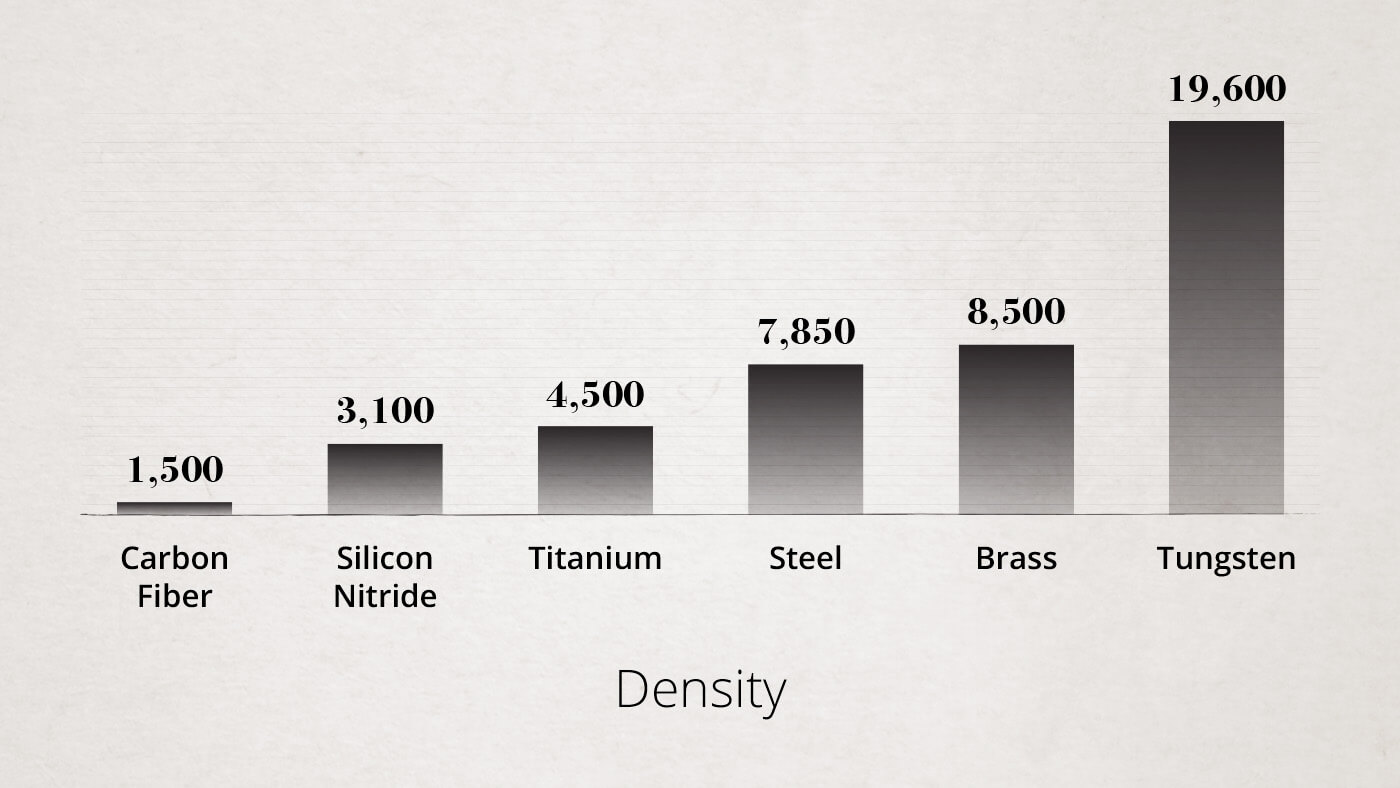 An 11 Millimeter Endpin Gives You More 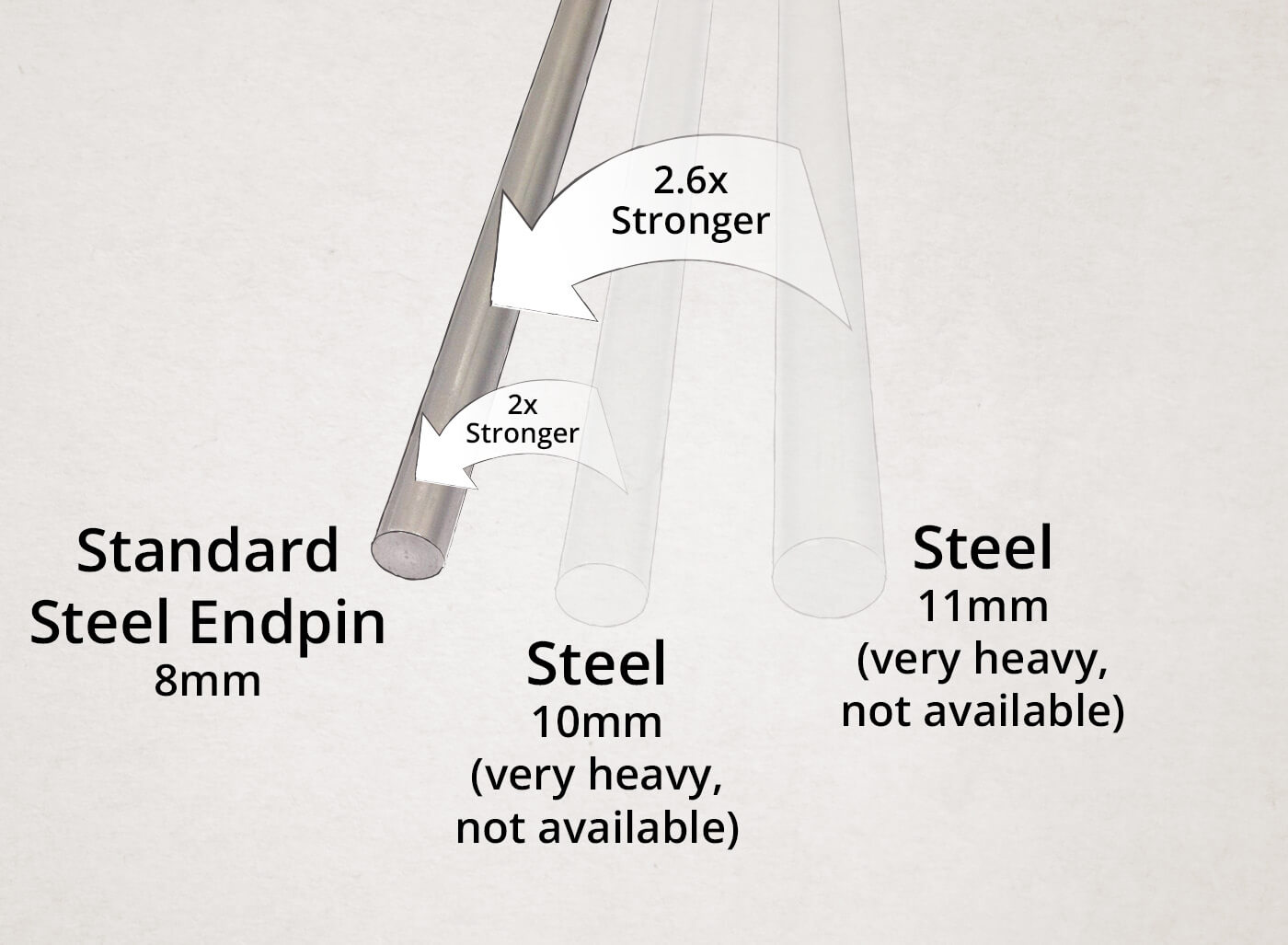 When a rod undergoes bending forces, it is the outermost layer particles that take the stress, not the inner particles. This means that a rod that is only a little thicker can be a great deal stiffer. But that is only possible if the density of the material is low enough. 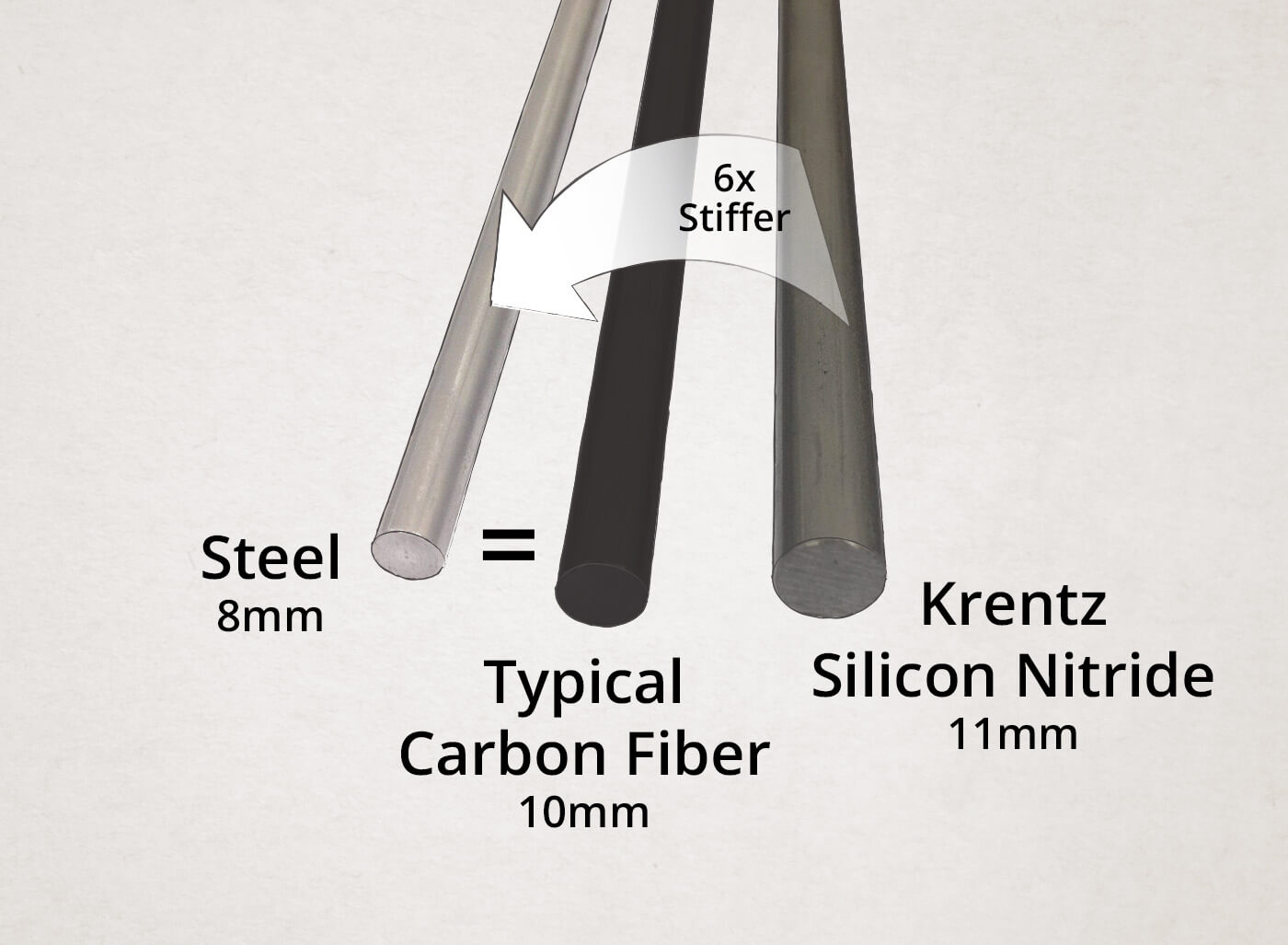 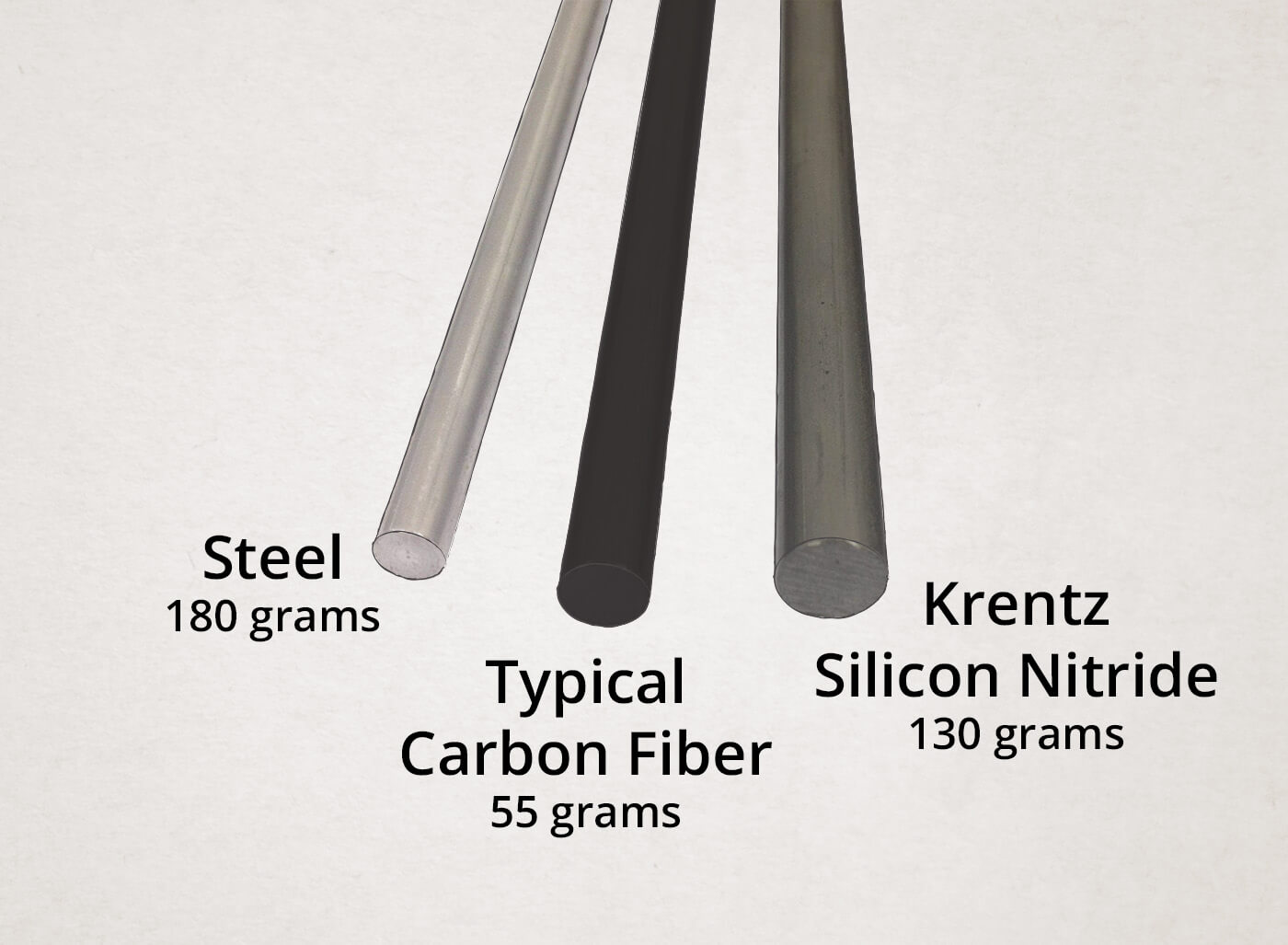 It’s just physics. No other endpin comes close to the increased speed and projection.